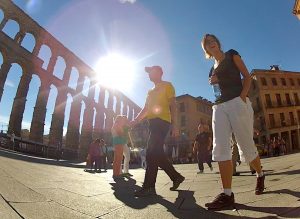 Madrid Outdoor Sports has a wide range of sportive activities, which you can combine with a visit to the beautiful city Segovia. After your sportive activity, you can enjoy the culture of the city calmly. There are a couple of interesting museum and several restaurants to taste the specialties of Segovia.

Segovia is a city full of history, which dates back to Celtiberian tribes and has been included in the 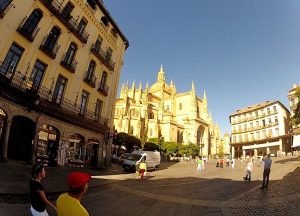 list of World Heritage Cities of UNESCO since 1985. The city is located on the high ground between the Eresma and Clamores rivers. Besides a famous aqueduct, there are several Romanesque churches and the Cathedral y Alcázar which make a majestic landscape.

The origin of the city is a mystery. We know for sure it is build in the pre-roman era, because Rome left a mark by building the Aqueduct. This aqueduct is build of 25.000 processed granite stones, put together without using mortar. The city of Segovia is being repopulated in 1088 after the recapture of Toledo by Alfons VI, the king of Castile en Léon. Segovia had a period of great prosperity at the end of the Middle Ages. This attracted many people to the city and so there lived Moors, Christians and Jews side by side. Together, they ensured economic growth during the 16th century. The wealth of the city resulted in a beautiful architecture, for example the Cathedral y Alcázar. Nowadays, Segovia lives primarily from tourism. 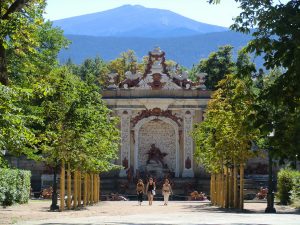 Located 80 kilometres from Madrid, on the slope of Segovia, you find La Granja. The history of the town is closely linked to the one of the Palacio Real. The Palacio was part of the palatial residences of Felipe II, where the wedding festivities of his fourth marriage where held. The palace had several fires and reconstructions that modified the structure. After a fire in 1697, that destroyed the palace significantly, the reign Carlos II of Spain left and build a new one, close to Valsain.

The gardens of the palace contain a large quantity of statues of mythological creatures. The statues are greatly appreciated for their artistic value. The gardens are based in memory of King Philip V, for his childhood at the French court.